Trampoline Parks Can Cause Some Serious Injuries 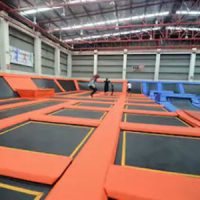 Remember when you were a kid, and you used to go in the yard and jump on a trampoline? Well, regardless of whether you did that or didn’t do that, today, trampolines are quite the rage—in fact, they’re so popular, people are making entire amusement facilities out of trampolines.

Many of these “trampoline parks” have trampolines lining the walls, trampolines with basketball nets, monkey bars with trampolines underneath—anywhere there is a surface, it is a trampoline.

But trampolines can actually be very dangerous, especially in a large commercial area, where kids of all sizes and weights may be jumping on them at the same time. Commercial trampoline parks, by one estimate, are more than 30% more likely to injure someone than the typical, smaller at home trampoline.

One thing that makes a trampoline park so dangerous is that there are kids of different weights jumping on it at the same time. This can push a trampoline so low that it becomes dangerous.

This impact can cause serious injuries to feet, ankles, and even result in paralysis if someone were to land on their head. Unfortunately, many parks allow as many people on the trampoline as they can fit, without regard to how much weight the trampoline can withstand before it hits the ground underneath.

The rebound effect of a trampoline can cause danger as well. When you jump on a trampoline, you go up, as the trampoline rebounds up. The trampoline pushes you upwards, and is flat again by the time your body comes down on it again.

However, in a trampoline park, if someone next to you jumps and comes up, the bottom of the trampoline springing back up can hit your body as your body comes down, causing injuries.

Trampolines also tend to hurl people out of control through the air. This is certainly dangerous for the person jumping, but if that person collides with someone next to him, who doesn’t expect to have a human body landing on top of him, the injuries can be very serious.

Unfortunately, there are no government regulations that govern trampoline parks. And although many agencies have recommended that younger children stay away from trampoline parks, few states have taken any measures to restrict who uses them. Rather, many states have just resorted to allowing businesses to make customers sign waivers, and then using the waiver to ignore the facilities’ safety obligations.

Were you injured in a trampoline park or an amusement park? Call our Boston personal injury lawyers today at The Law Office of Joseph Linnehan, Jr. at 617-275-4200 for help with your personal injury case.

By Joseph R. Linnehan, Jr. | Posted on April 14, 2022
« How Will A Jury Value Your Injuries?
Bedsores Can Kill Nursing Home Residents »