Accident Proves Parasailing And Water Based Activities Can Be Deadly 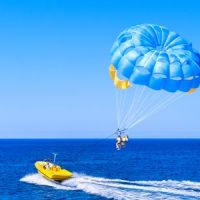 When it comes to summer activities, there is a mix between fun and the caution that must be taken when engaging in these activities. Many people engage in fun summer activities without realizing how dangerous some of them can be. One such activity, which has resulted in tragedy and an ensuing lawsuit, is parasailing.

Parasailing is an activity where a rider straps on a harness that contains a parachute, not unlike the kind of parachute you would jump out of a plane wearing. The rider is pulled by a boat, and the air flow from being pulled by the boat lifts the parachute, thus lifting the rider high into the air.

But recently, in the Florida Keys, parasailing has become a tragedy. A woman, her child and her nephew were parasailing together. As they were in the air, a gust of wind came and began to take control of the parachutes, and thus, the riders, high into the air. The gust of wind was so strong, that it was the air current, and not the boat, that were actually controlling the riders.

This can become a dangerous condition, and not just for the parasailers. A strong gust of wind can pull the parasailers so hard that it can capsize a smaller boat, or make a boat captain unable to control the boat. The boat captain here, apparently with other people on board, and fearing that the boat would capsize, cut the lines to the parachute.

Once the lines were cut, the parasailers were controlled only by the wind. The gust pulled the riders into the side of the 7-mile bridge. One adult was killed, a child suffered minor injuries, and another child faces a series of plastic surgeries to reconstruct facial injuries.

A lawsuit has now been filed, calling into question how appropriate the actions of the boat captain were. The lawsuit is a list of things that can go wrong in a parasailing accident.

The lawsuit questions both the decision to cut the lines to the parachutes, as well as to go out in windy conditions in the first place. The lawsuit also alleges that the wind gust was not a freak accident, but rather was part of a larger weather pattern that should have alerted the company not to allow people to parasail.

Attorneys for the family say that the captain had other options, other than cutting the parasailing lines. Ultimately, the case will likely get experts involved who will testify as to whether the captain’s actions were reasonable or not.

The lawsuit also alleges that the boat did not have weather monitoring equipment and that riders did not get important briefings that would help them understand what to do in case of an emergency.

By Joseph R. Linnehan, Jr. | Posted on August 22, 2022
« TikTok Is Sued After Challenge-Based Deaths
Are You More Likely To Die In A Hospital On The Weekend? Maybe So. »