Slip and Falls And The Science Of Friction 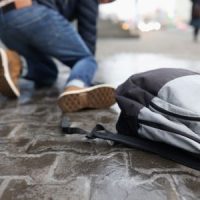 Let’s say that you fall in someone’s store or on someone’s property. You may not think there’s a lot of science involved. Sure, there are legal and factual issues that need to be resolved to see if the other side is liable, but a scientific expert is hardly the kind of expert you’d think would be needed.

But there is some science to slip and fall accidents, because often when someone falls, there are issues of friction, which brings in the scientific concept of coefficient of friction.

As you may already know, friction measures the degree to which two surfaces, when rubbed together, will either hold together, or slide easily against each other (what you may call “being slippery”). How much or little friction there is between two given surfaces is often called the coefficient of friction.

The friction that is often at issue in a slip and fall case, is that between the bottom of the soles of your shoes, and the ground beneath you, where you fell.

There are a lot of factors that go into play when determining what the coefficient of friction is between two surfaces. Even slight variations can alter friction.

For example, the bottom of your sneaker tends to have a high coefficient of friction, meaning it is generally quite “tacky,” and will hold to the ground beneath it, even if the ground tends to be slippery. But take that same sneaker, and wear down its sole so that it’s flat, without much tread, and suddenly, the tackiness is gone, and the shoe can have a low coefficient of friction.

Different surfaces have different coefficients of friction. You may have noticed that some places you walk just seem like they don’t “hold” your feet to the ground, no matter what you do.

Of course, the coefficient of friction can change if there is substance on the floor. No matter what kind of shoes you are wearing, things like ice, water or cleaning fluids, can lower the coefficient of friction so much that an otherwise stable surface can become quite dangerous. Making it more complex, some surfaces are more resistant to being slippery when there is a substance on them than other surfaces are.

It’s not just low friction (slipperiness) that can cause injury. Even having too much friction can be dangerous. A surface below your feet can be so tacky, it can prevent your feet from naturally sliding even just incrementally, causing your feet to stick or hold to the ground and thus, causing you to fall.

Call the Boston personal injury lawyers at the Law Office of Joseph Linnehan Jr. for help if you are injured because of a fall of any kind. Call us today at 617-275-4200.